My final look at Best in Show evaluates the RPG’s that were represented at E3. There is one thing you may immediately notice about the games in my list, none of them contain the words Final or Fantasy in them. While Final Fantasy XIII did look amazing and I myself am looking forward to it, I feel the RPG’s below offer a fresh perspective on the RPG genre. Did your favorites make the list? 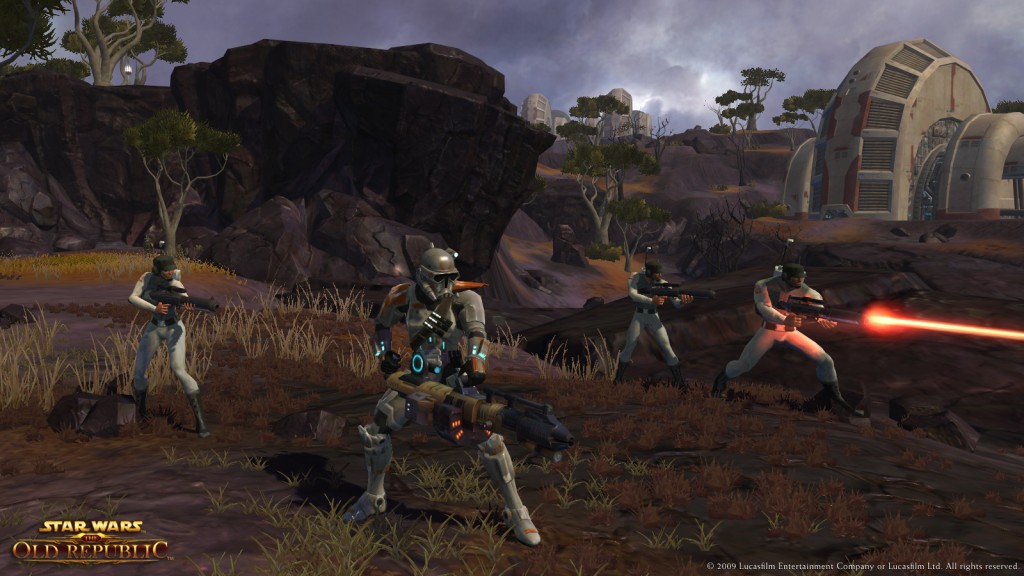 Fancy CG trailers aside, what makes Star Wars: The Old Republic my choice for Best in Show is Bioware has created some real innovations for the MMO genre. Most notably is every bit of dialogue in the game will be voice acted. This is a massive undertaking and they think it’ll be one of the biggest voice recordings for any game ever made. If that wasn’t amazing enough, just like in other Bioware RPG’s, your choices have an affect on the storyline. In the demo they were showing, players were in control of a Sith character. At one point during the demo, players had to choose between killing a captain of a ship or sparing his life. If they killed him, the ship was then boarded by Jedi they had to fight off. If they spared his life, the captain would later shoot down the pods the Jedi were approaching in. This is mostly unheard of in current MMO’s where storyline usually follows a linear path.

However, the biggest draw and what could also be its biggest weakness too, is the appeal of playing a Jedi in an online game. There’s no denying the appeal of going online, force choking, throwing lightning, and generally being evil towards other players. However, Bioware has to make sure all their classes are attractive to play, so every player doesn’t end up rolling a Jedi class. Bioware has already proven that they can innovate the single player RPG genre, let’s see if they can take that same innovation to the online world. 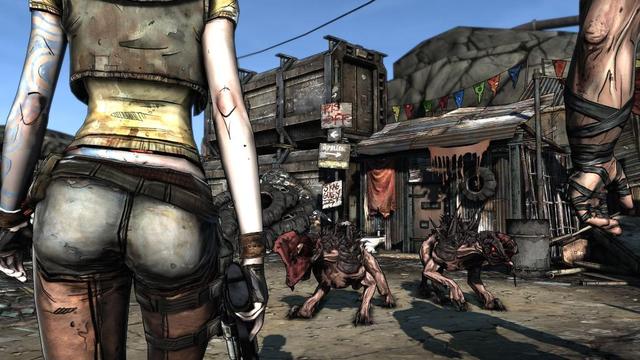 If this is the first time you have ever heard of the game Borderlands, don’t feel so alone. Just like you I had never heard of this game before E3. After hearing people talk about it and seeing a really awesome trailer I am really excited about it now. At first glance you will look and tell me I put this in the wrong category as it is a first person shooter. You soon learn it moves quickly past that with a level up system, a skill tree, a loot system (they claim they will have over 1,000,000 different guns in the game) and everything else that makes up an RPG. Seeing the Diablo formula applied to an FPS is ultimately why I think this game can do well. On one hand you have the addictive formula of leveling up a character, collecting loot, armor and weapons with friends online. Add in the FPS style gameplay that can draw from a player base that may not normally play RPGs, and you have a formula for a massive hit. We’ll see if Borderlands becomes the Diablo/PSO/Monster Hunter for the FPS crowd. 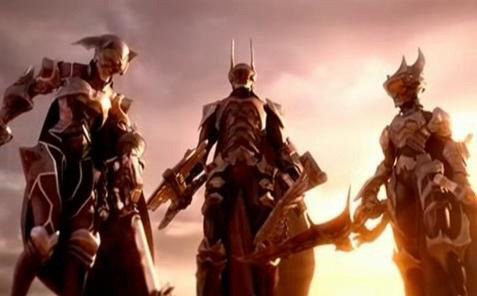 In an E3 year where console exclusivity was the big rage, I’m a bit surprised that Square Enix did not announce any information regarding Kingdom Hearts 3. The first two Kingdom Heart games have been Playstation exclusives so it makes sense that the third one would be a PS3 exclusive. Then again, if E3 2008 showed us anything, it is that no series is safe from going multi-platform. Could Kingdom Hearts follow the same trend and join its franchise brother on other consoles? Is that why we haven’t heard any information regarding Kingdom Hearts 3 yet? I guess I’ll have to settle for spin-off after spin-off after spin-off until then.

This ends my look at some of the most anticipated games coming out of E3. There were quite a few genres I didn’t get a chance to talk about, but just like the three genres I covered they were full of so many candidates. Among some of these are games like DJ Hero, Rock Band: The Beatles, Alan Wake, Splinter Cell: Conviction, Split/Second, Forza Motorsport 3, Halo: ODST, and Left4Dead 2. 2009 and early 2010 already look like another wallet burning game season. Look forward to Unwound’s coverage of all these games and more in the months to come!

Just like a bad Star Wars prequel, I’m back again with Best in Show Part 2! Today I’m going to tackle sidescrollers. While there weren’t an abundance of sidescrollers at this year’s E3, the ones that were shown prove that 2D is never truly dead. Which games measure up today? Let’s find out! 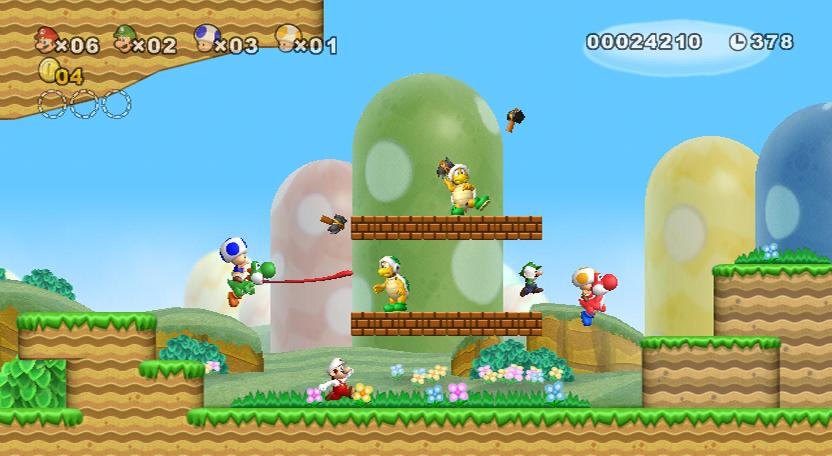 New Super Mario Bros. Wii reminds us that next generation gaming can be as simple and fun as the first time we picked up a controller. We have come full circle as the gameplay looks identical to the original Super Mario Bros on the NES. Of course they had to add some new mechanics and there’s just enough to shake up the old formula. My favorite new addition? The Penguin suit that lets you shoot ice balls and slide around on your belly. The biggest change by far is the inclusion of 4-player co-op. Based on the gameplay that I saw, this looks like a fun party like experience that casual and core gamers alike would enjoy. Nintendo has gone back to their roots with this title, and I’m more than happy to come along for the ride. 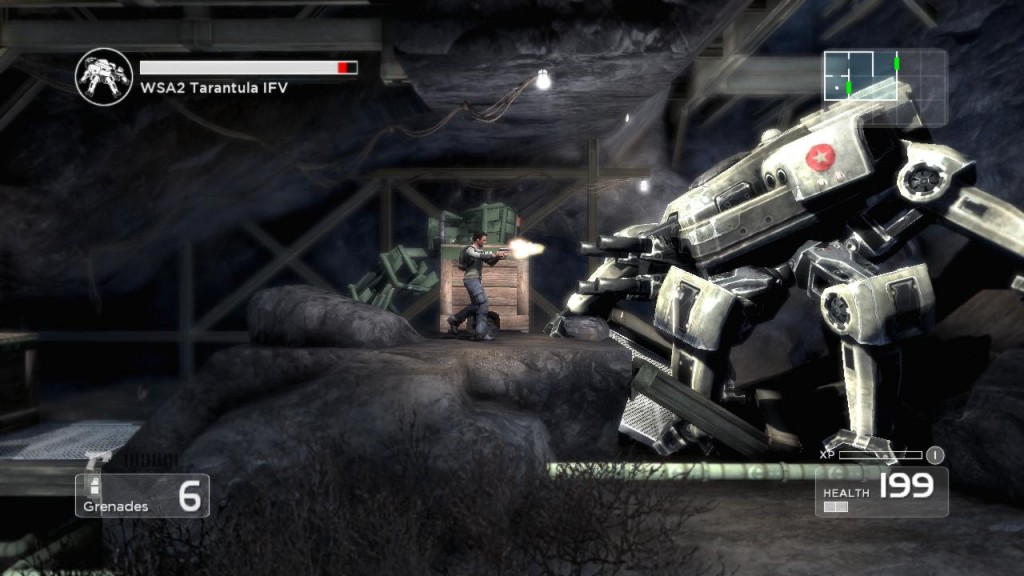 The first thing that impressed me was the quality of graphics not just for a 2D game, but also on a game that is a downloadable title. The second thing that drew me further into the game was the Metroidvania style gameplay of exploration and combat. What makes this game stand out is the way they present character progression. Just like Super Metroid and Castlevania: Symphony of the Night before it, your character levels up and finds better items that allow for greater exploration. Unlike those two titles, the main character is not a space bounty hunter or half-vampire. He’s a regular hiker with a flashlight looking for his lost girlfriend. So to show the progression from hiker to one-man army, your character dons technology he finds until he ends up looking like something out of Robocop. Shadow Complex looks like a great addition to Metroidvania style games, so look for it this summer on Xbox Live Arcade. 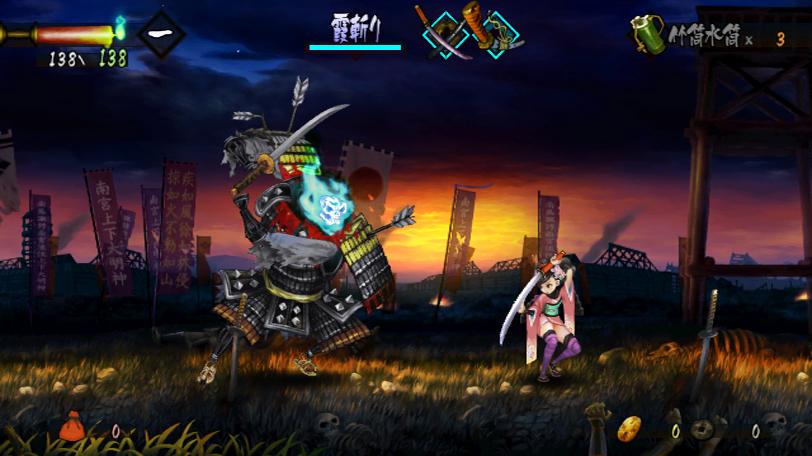 The thing I love about next generation hand drawn 2D games is the amount of detail they can put into the sprites. Just like Vanilla Ware’s previous game Odin Sphere, Muramasa looks visually stunning. The above screenshot can hardly do it any justice. As not much of the gameplay has been revealed, we’ll have to hold our breaths and hope that it doesn’t turn into a repetitive beat-em-up.

Hope you enjoyed Part 2! Come back Thursday for my final Best in Show post where I’ll discuss my thoughts on the RPG’s of E3 2009. Plus a quick list of all the other genres I’ve skipped over. See anything you don’t agree with above? Tell me why in the comments!

By now the craziness of E3 has died down like coming off of some crazy drug. E3 came back big this year with lots of great greats shown off from all sorts of publishers and developers. Inevitably, like most shows where companies are all trying to one up each other, certain games just generated bit more hype and excitement than others. I’m going to talk about what I think were some of the standout hits this year. Please remember, I’m not trying to flame bait for any one console over the other. If you disagree with any of what I said, I’d love to hear your comments. 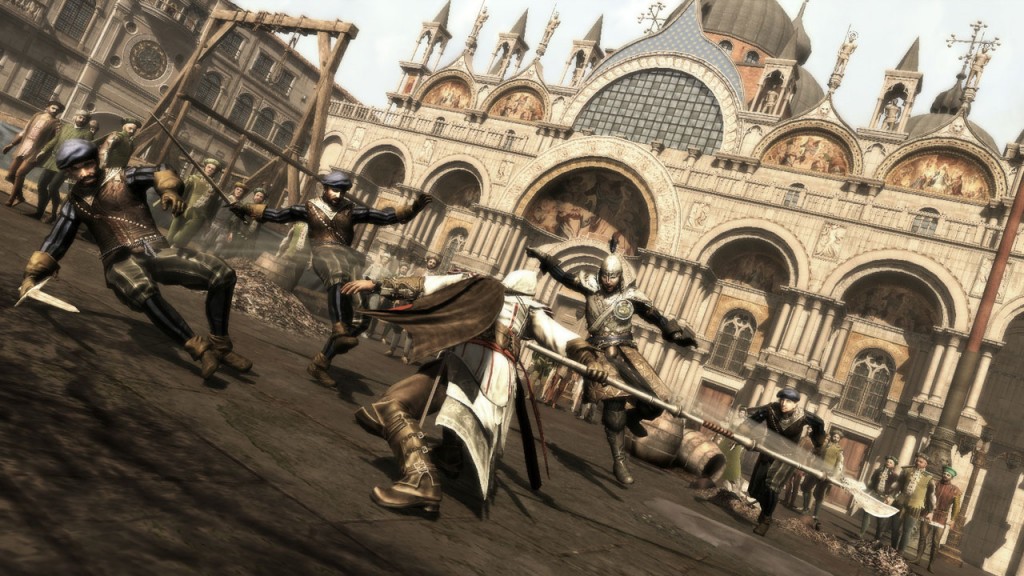 This E3 was particular full of action games for the core gamer demographic such as God of War 3, Uncharted 2 and Bayonetta. Assassin’s Creed 2 puts you in the Italian Rennasiance as a man named Ezio who is extracting revenge against the rival families in Italy who killed his family. One of the main reasons this game stood out above the rest is the scope of the world they presented. The large crowds are still around from the first Assasin’s Creed and yet the world is big enough for Ezio to ride a flying machine across the span of a city. Ubisoft Montreal said they fixed many issues players complained about the first game, a big one being the combat. From the demo, you could Ezio disarming the guards and using their weapons against them. Assassin’s Creed 2 launches in November of this year.

Runner Up – Metroid: Other M 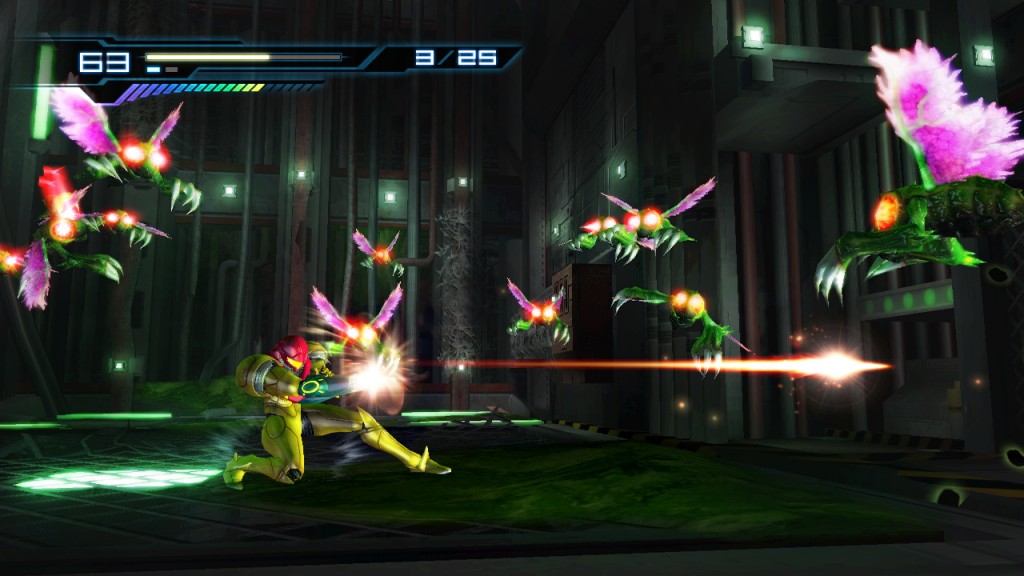 Nintendo did not have too many major surprises (at least none that weren’t met with a big resounding HUH??) at their press conference save this one, Metroid : Other M. What really made this a surprise was seeing that Team Ninja would be a co-developer on it. The trailer and screenshots show that this iteration of Metroid will possibly have a mix of 3D and 2D action, but little is actually confirmed. Also with Team Ninja being Itagaki-less, the question remains of what talent is left behind from the old Dead or Alive and Ninja Gaiden staff. Nevertheless, it looks considerably different than the Prime series and looks like an exciting reboot to the Metroid franchise. See? Nintendo still cares about hardcore gamers! Metroid: Other M is slated for 2010 release. 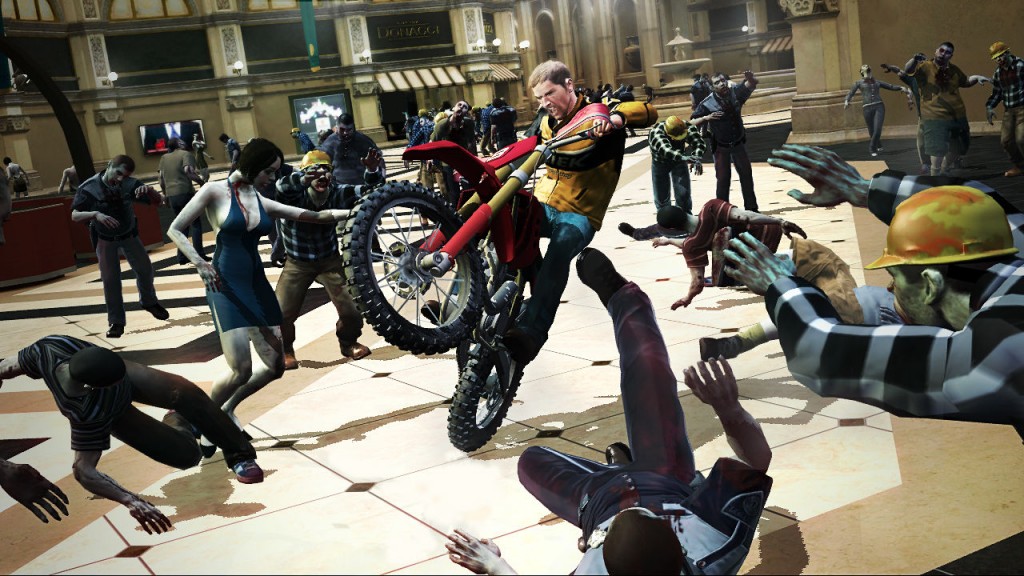 The US may have stopped caring or forgotten about swine flu, aka the new Black Plague, but Japan hasn’t. Due to concerns about traveling abroad, Capcom of Japan decided not to attend this year’s E3. This move denied the public more information into the follow-up to their smash hit Dead Rising. Hopefully we’ll hear more info soon like how the infection spread to Las Vegas Fortune City, will they be any changes to the gameplay and most importantly, does the new main character forgo waxing?

You're listening to the Unwound show! Unwound is an internet radio talk show where each week we discuss the latest and greatest (and sometimes worst) in anime, video games and anything that comes to mind.

Listen to us every Sunday night, 5pm Pacific, at Japan-A-Radio.