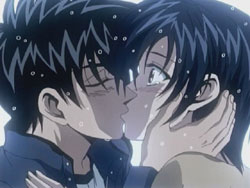 Basically, you have yourself a kind of love story the likes of which you’ve seen many times before. A guy moves from the country to the city and upon his arrival becomes very interested in a girl he sees doing the high jump on his future school’s grounds. It’s love at first sight and so far I was buying into the premise. Until they started talking and interacting, and then it was like I was watching someone rip off three great romantic comedies all at once. Within the first episode alone, I groaned at how the writer seemed to rip whole plot elements from Kimagure Orange Road, Maison Ikkoku, and Love Hina right before my very eyes… and not even with any sense of flair. Most romantic comedies nowadays find it difficult to be original, but the fact is that most of the best series out there take an unoriginal idea and make it their own. Suzuka managed to simply adopt those concepts and executed them with all the finesse of open-heart surgery with a rusty chainsaw. I didn’t think the series could get any worse, but then the main “male” character, Yamato, apparently uses his audacious tenacity to pursue a girl, the eponymous Suzuka, in spite of the fact that she thinks he’s a complete moron and doesn’t want anything to do with him. By the way, this all takes place in a bathhouse attached to a dormitory for girls. It’s like Love Hina and Maison Ikkoku, except both of those series were actually good. Kimagure Orange Road’s comparison lies in the fact that Suzuka is like Super Madoka, only I actually liked Madoka… oh, and KOR was actually a good anime. 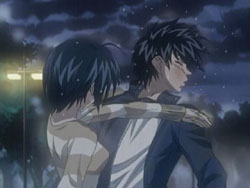 Seriously, don’t watch this anime, unless you want your balls to shrivel up.

Twenty-five damned episodes of this bullshit! Don’t get me wrong, I like a good strong-willed female character just as much as the next guy, but this one kind of took it to an extreme and after then fourth episodes, I was like… c’mon Yamato, there are other girls out there for you to fall for. No need to waste your life trying to get this bitch to fall in love with you. I mean, for shit’s sake, man… grow some balls. By the twenty-fifth episode, I was convinced I was watching two women and not a guy and a girl… or quite possibly, Suzuka was carrying enough balls for the both of them, because Yamato had to be standing behind the door when they were passing out balls and spines. Possibly brains. And guts. I find it very difficult to like a character or even bother caring about what happens to him when in the end, I have no respect for him. It’s called piss-poor writing, or quite possibly, how to screw up a story in a hurry.

Use Suzuka if you need to forcibly extract information from someone. Do not look directly into the screen or else your soul will ache.